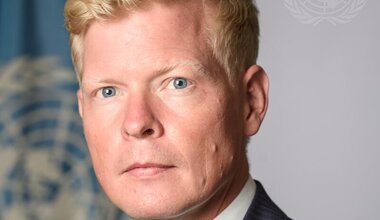 Hans Grundberg was appointed by the Secretary-General António Guterres on 06 August 2021 and assumed his duties on 5 September 2021. Mr. Grundberg succeeds Martin Griffiths (United Kingdom of Great Britain and Northern Ireland) who served in that role since March 2018.

Mr. Grundberg brings to this position over 20 years of experience in international affairs, including over 15 years working on conflict resolution, negotiation and mediation, with a focus on the Middle East. Since September 2019, Mr. Grundberg has served as Ambassador of the European Union to Yemen.

Previously, he headed the Gulf Division at the Swedish Ministry of Foreign Affairs in Stockholm during the time that Sweden hosted the UN-facilitated negotiations that culminated in the Stockholm Agreement in December 2018. Mr. Grundberg is a career diplomat, with a focus on the Middle East and in conflict resolution, and has served with both Swedish and European Union missions abroad. His previous postings include Cairo and Jerusalem, as well as Brussels, where he chaired the Middle East/Gulf Working Group of the European Council during the Swedish presidency of the European Union in 2009.

He holds a Master of Science in business and economics from the Stockholm School of Economics.

Martin Griffiths of the United Kingdom, ended his mandate as Special Envoy of the UN Secretary-General in July 2021. Mr. Griffiths was appointed in February 2018, succeeding Ismail Ould Cheikh Ahmed of Mauritania, who served as a Special Envoy to the Secretary‑General from April 2015 to February 2018.