A year after the Stockholm Agreement: Where are we now?

What is the Stockholm agreement? 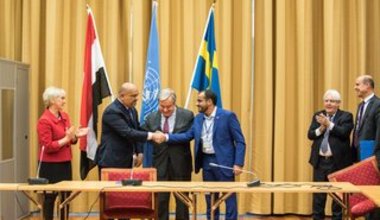 The Security Council endorsed the Stockholm agreement under resolution 2451 (2018).

What prompted the UN effort to broker the Stockholm agreement?

The Special Envoy worked with the parties to identify important issues that the parties could address together in order to build confidence and create momentum towards a comprehensive solution.

The situation in Hudaydah and Taïz, as well as the exchange of prisoners, emerged as issues on which the parties might find common ground.

At the time, a battle over the port city of Hudaydah appeared imminent. The city and surrounding area are home to around 500,000 people. 90% of Yemen’s needs of food and medicine is imported and nearly 70% of these imports entered the country through the ports at Hudaydah and nearby Salif.

Before the Stockholm agreement, the UN Office for the Coordination of Humanitarian Affairs (OCHA) warned that the port’s destruction would have constituted a “tipping point” beyond which it was going to be impossible to avert massive loss of life due to famine. UNICEF estimated that 300,000 children were at risk of starving to death if the port was closed.

While Yemen remains the world’s worst humanitarian crisis, the Stockholm agreement succeeded in averting further deterioration which would have jeopardized hundreds of thousands of Yemeni lives.

What were the main commitments stipulated in the Stockholm agreement?

The parties committed to an immediate ceasefire in the city of Hudaydah and the ports of Hudaydah, Salif and Ras Issa, redeployment of forces, securing the ports, the establishment of the joint Redeployment Coordination Committee chaired by the United Nations, and the use of the revenues of the ports to support civil service salary payments. The agreement also provided for a strengthened UN presence in the city of Hudaydah and Ports of Hudaydah, Salif, and Ras Isa, which led to the establishment of the UN Mission to support the Hudaydah Agreement, UNMHA through the Security Council resolution 2452 (2019), adopted on 16 January 2019.

The parties agreed to provide to the Office of the Special Envoy and the International Committee of the Red Cross (ICRC) final lists of prisoners, detainees, kidnapped persons, or any persons arrested in relation to the events, and to and establish a technical working group to focus exclusively on the logistical and technical aspects of the exchange.

The parties agreed to form a joint committee to address the situation in Taïz including representative from the parties of the conflict and the civil society with the participation of the United Nations.

How is the implementation of the Stockholm agreement progressing?

The Hudaydah agreement averted a potentially catastrophic offensive on the city and ports. The ceasefire, which entered into force on 18 December 2018, contributed to a safer environment for civilians. It is estimated that 150,000 people that had left the city have returned after the agreement was put in place with the ceasefire still largely holding.

The work of the UN Country Team and others has also expanded in the Governorate since the ceasefire came into effect seeing increased humanitarian flows reaching those in need.

A UN mission was established (UNMHA) in Hudaydah to support the parties in their implementation of the Hudaydah Agreement. This includes UNMHA Head of Mission’s chairing the Redeployment Coordination Committee through which the parties work jointly towards upholding their commitments as stipulated in the Stockholm agreement.

The parties have established a Joint Operations Centre at the UNMHA headquarters to support the Ceasefire Enhancement and De-escalation mechanism. This is the only venue where the parties work jointly on maintaining the ceasefire in Hudaydah. Liaison officers from each party are now physically present on a 24/7 basis inside this joint structure.

Five joint Observation Posts were established on the ground to monitor the situation and prevent further military escalation which resulted in significant reduction in the overall level of violence and the number of security incidents in the city frontlines.

The parties agreed on a mechanism to deposit the port revenues into a special account in the Central Bank branch in Hudaydah under UN supervision to pay for the salaries of the civil servants in Hudaydah and elsewhere.

While full redeployment has not yet taken place, the agreement and the UN presence in Hudaydah has directly contributed to a reduction in hostilities and the improvement of the humanitarian situation, while also providing opportunities for increased confidence in the prospect for the conflict to end.

A major challenge to the work of UNMHA is the restrictions on the freedom of movement. UNMHA counts on the commitment of the parties to overcome this challenge.

A technical committee has been established where the lists of prisoners were exchanged, and logistical issues were discussed. The parties have been taking unilateral initiatives and released hundreds of prisoners, including minors.

Regrettably, Taïz represents a critical area of the Stockholm agreement where there needs to be much greater focus and attention on mediating agreements between the parties to de-escalate hostilities and to open sustainable humanitarian corridors to alleviate the suffering of the inhabitants of Taïz.

How does the Stockholm agreement help the overall peace process in Yemen?

What is the office of the UN Special Envoy doing to ensure the full implementation of the Stockholm agreement?

We are committed to continue working with the parties through our good offices to implement the agreement and move forward with the political peace process.

We continue pressing the parties to compromise and not miss this hard-earned opportunity.

On the detainees and prisoners’ agreement, we have been working intensively with the parties, together with ICRC, and we have been offering our technical and logistical support.

The Stockholm agreement hasn’t been fully implemented. How does this reflect on the efforts to resume the political process to reach comprehensive peace in Yemen?

Yemen has been through a brutal war for five years. It is our world’s worst humanitarian crisis today. On top of that, Yemen has been through decades of instability and intermittent episodes of great violence. We focus on finding hope that this will end soon, and on translating this hope into a new reality for the Yemeni people as soon as possible.

We see the modest successes of the Stockholm agreement as bringing us closer to achieving sustainable peace for all Yemenis. The process might be slow. There will continue to be setbacks. But we will continue to nurture and cherish every small milestone on the path of supporting Yemenis in their quest for peace and stability.

The purpose of the Stockholm agreement was to avoid a military offensive on Hudaydah, and to alleviate the humanitarian suffering for the Yemeni people. By itself, it could not bring peace to all of Yemen. That work needs to start. While continuing to work to implement the agreement, the time to move to a political process to reach peace in all Yemen is right now. Yemen cannot wait.