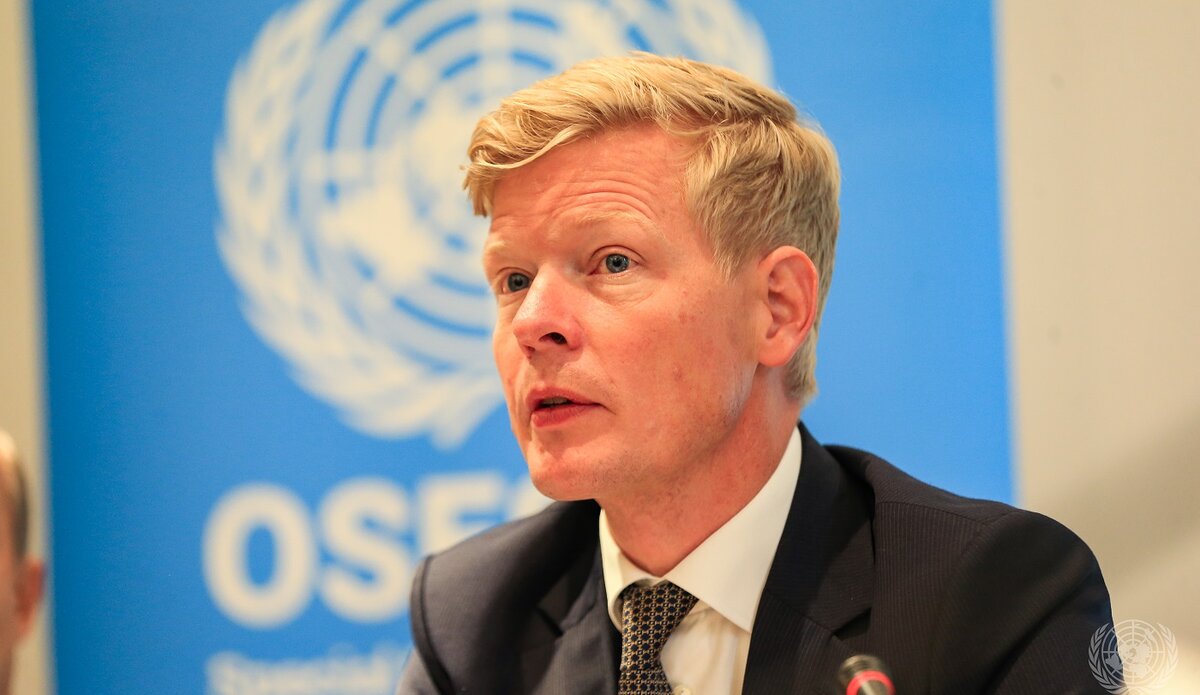 AMMAN, 24 May 2022 – The UN Special Envoy for Yemen, Hans Grundberg, concluded today a two-day meeting with Yemeni economic experts from diverse backgrounds to consult on priorities for the multitrack peace process. Participants underlined the momentum provided by the truce on economic issues and identified opportunities for incentivizing further progress.

Discussions centered on identifying key issues to be addressed in a future dialogue between the parties and in the economic track of a UN-led multitrack process. Issues discussed included the coordination of financial and monetary policies, currency exchange rate stabilization across Yemen, public revenues, the financing of public service salaries, the rising costs of goods due to freedom of movement restrictions and double taxation, reconstruction, as well as other strategic questions of priority.  Furthermore, discussions emphasized the need for coordination in vital sectors that could have a direct impact on civilians and their livelihoods.

Participants also highlighted challenges faced by the private sector and ways to address those challenges to help revive the Yemeni economy in a manner that serves the public good and the future of Yemen. They also underlined the urgent need to support the Yemeni commercial banking sector and its ability to engage internationally and support trade.

“Addressing the deteriorating Yemeni economy will be central to both alleviating the chronic suffering of Yemeni civilians and reaching a sustainable solution to some of the key drivers of this conflict,” said Mr. Grundberg. “It is important to identify those areas where our efforts could prove useful and efficient in helping parties find  common ground in addressing the issues that affect all Yemenis across the country.”

AMMAN, 22 May 2022 – The UN Special Envoy for Yemen, Hans Grundberg, met today with a diverse group of Yemeni women peace activists, experts, civil society and private sector actors and leaders as part of his efforts to consult on the Framework for the multi-track peace process, including priorities that factor in the experiences and perspectives of Yemeni women and youth. The meeting also discussed the implementation and renewal of the truce.

Women participants highlighted their priorities for the peace process, including improving the living conditions and livelihoods of Yemeni civilians, lifting restrictions on civilians freedom of movement, especially women and children, addressing the recruitment of child soldiers, safeguarding schools and access to education, involving local mediators and the private sector in the security track of the peace process, improving access to basic services and goods, addressing the fragmentation of fiscal and monetary policies, focusing on the removal of mines that impact women and children, and ensuring equal job opportunities for all Yemenis, including women and youth.

The UN Special Envoy will continue in upcoming weeks his consultations with diverse Yemeni constituencies, including economic experts, civil society, and political parties

Amman, 19 May 2022 – The Special Envoy of the Secretary-General for Yemen, Hans Grundberg, concluded today a two-day meeting with a diverse group of Yemeni public figures. The meeting comes as part of his consultations with Yemeni groups on the way forward, including their priorities for economic, political, and security tracks. Participants discussed the implementation and extension of the Truce, as well as ways to capitalize on its momentum to initiate a comprehensive political dialogue.

“I am grateful for the opportunity to consult a diverse group of prominent Yemeni figures and experts at this pivotal moment in time. This is the time to seize the window of opportunity provided by the Truce. Our focus is to ensure the Truce is extended for the benefit of Yemeni civilians while making progress on the peace process,” Mr. Grundberg said.

Participants highlighted the need to continue prioritizing improving conditions and civilians’ livelihoods, including by lifting restrictions on the freedom of movement of individuals and commercial goods across all Yemen. They further highlighted the need to focus on the Yemeni economy and challenges related to the payment of salaries, bank transfers, discrepancies in exchange rates, and the unification of the Central Bank. Discussions also highlighted the need to address the challenges facing Yemeni women and ensure their meaningful participation in the peace process.

Discussions also addressed the critical need for an inclusive approach to the political process that reflects the broad and diverse political life in Yemen.

Amman, 24 March, 2022 – The Special Envoy for Yemen, Hans Grundberg, concluded today the third week of bi-lateral consultations with Yemeni stakeholders. He met with representatives of various political groups and parties, including Al-Rashad Union, the Political Bureau of the National Resistance, the Southern National Coalition, the Peaceful Tihami Hirak, and various representatives from the Supreme Council of the Revolutionary Southern Hirak.

Participants emphasized the importance of regional and international support for ensuring the success of any future political process. They highlighted the need to address humanitarian and economic issues that could help alleviate the suffering of all Yemenis, including addressing marginalization, the release of detainees, the re-opening of air and sea ports and roads across Yemen, opening humanitarian corridors, supporting the national economy, the equitable distribution of resources, and unifying monetary policy countrywide.

Discussions also focused on the need for a nationwide ceasefire that would halt all military activities. Participants offered their visions on how to address key issues, including the future of the Yemeni state, representation, and the southern question, as well as arrangements for transition and reconstruction.

The Special Envoy will resume his consultations next month with details to be announced in due course.

Amman, 18 March, 2022 – The Special Envoy for Yemen, Hans Grundberg, concluded yesterday, 17 March, the second week of bi-lateral consultations with a wide range of Yemeni stakeholders, as part of his efforts to inform his Framework that aims to chart a path towards a sustainable political settlement to the conflict. He met with leaders from the General People’s Congress party and representatives of the Southern Transitional Council and the Inclusive Hadhramout Conference. He also consulted with security experts including military and security professionals and civil society leaders.

Discussions focused on the design, guiding principles and elements of the multi-track process. They also emphasized the need for de-escalation measures leading to a ceasefire as an important step for civilian protection and improving access for people and goods.

All participants highlighted the urgent need to address immediate priorities related to improving the economic conditions for civilians and mitigating the impact of the conflict on civilians, while not losing sight of longer-term questions related to the final settlement of the conflict and the future of Yemen, including the Southern question. Participants also stressed the centrality of reaching a regional and international consensus to ending the conflict in Yemen.

In-depth discussions with security experts, including civil society leading stabilization and mediation initiatives, helped articulate visions on how security issues could support the resumption of political negotiations. Participants underlined the need for addressing the root causes of the conflict, and the need to support the local level security institutions to help restore the delivery of key services to civilians. They further emphasized the need to support security governance in Yemen and improve cooperation between civil society and security institutions in addressing human rights issues.

The Special Envoy will continue his bi-lateral consultations next week with more Yemeni political parties, including Al-Rashad Union, different factions of the Supreme Council of the Revolutionary Al-Hirak for the Liberation and Independence of the South, the National Resistance Council, the Southern National Council, and the Tihama Hirak.

Amman, 11 March 2022 – The first week of bilateral consultations with various Yemeni stakeholders concluded yesterday, 10 March. Leaders from the General People’s Congress and representatives from Al-Islah Party, the Yemeni Socialist Party and the Nasserist Unionist People's Organization met with the Special Envoy of the Secretary-General for Yemen, Hans Grundberg, to discuss ideas for his Framework, including a multi-track process, that aims to chart a path towards a sustainable political settlement to the conflict.

The Special Envoy explained that the intent of the consultations was to gather, in an honest and frank way, ideas, views, and suggestions on immediate and long-term priorities for the political, security and economic tracks. He stressed the importance of engaging with multiple Yemeni groups in the consultations, so that the Framework is informed by diverse voices.

All participants welcomed the consultations and expressed support for the Special Envoy’s efforts. A range of  issues were raised by the participants regarding the agenda and priorities of the three tracks, the guiding principles for the political process and issues related to process design. Participants highlighted the need for a ceasefire and the urgency of returning to negotiations and resuming the peace process.

Some of the key points raised during the first week of discussions focused also on the need to address the plight and common challenges facing all Yemenis including the humanitarian situation and alarming living conditions of civilians across the country and the need to address a fractured economy.

The Special Envoy will continue his planned bi-lateral consultations with other parties and stakeholders in the coming weeks. Next week, he will meet in Amman with representatives of the Southern Transitional Council, the Inclusive Hadhramout Conference, the General People’s Congress, security and economic experts and civil society.

Amman, 7 March 2022 - The Special Envoy of the Secretary-General for Yemen, Hans Grundberg, started a series of consultations today, Monday, in Amman, Jordan. Bilateral meetings with leaders from the General People’s Congress party and delegations from Islah, the Yemeni Socialist Party and Nasserist Unionist People’s Organization will take place the first week. Over 100 Yemeni men and women from political parties, the security and economic sectors, and civil society will be consulted over the next few weeks in Jordan and in Yemen. The Special Envoy will continue engaging with the Government of Yemen and Ansar Allah as well as with regional and international stakeholders. Efforts will also be made to consult the broader Yemeni public, including youth, to ensure the Framework reflects Yemenis’ interests and aspirations.

Building on the Special Envoy’s prior engagements, the consultations will focus on identifying immediate and long-term priorities along political, security and economic tracks. This will inform the development of the Special Envoy’s Framework which will outline an inclusive multitrack process to address immediate needs and long-term issues required to make progress towards a political settlement. “This is a dire time for Yemen. The conflict, which is soon entering its eighth year, continues to exacerbate the suffering of civilians, to threaten regional stability, and undermine the prospects of a peaceful solution.” Mr. Grundberg said, “There is an urgent need to establish an inclusive political process that reverses this destructive trajectory and provides opportunities and space for dialogue at multiple levels.”

“I am grateful to the Hashemite Kingdom of Jordan for hosting these consultations and to all Yemeni political actors and diverse constituencies for their willingness to participate and engage on a positive agenda for the future”, Mr. Grundberg added.